Does this sound like a familiar scenario?: You’ve found your favourite Seinfeld clip, you’ve waited for it to buffer, you’ve clicked fullscreen mode, swiftly alt-tabbed to check your mail (the thousandth time today), switched back into Firefox, clicked fullscreen again, only to find the comedy genius’ face has vacated your screen, or frozen, glass-eyed and unanimated, as the sound plays on? Seinfeld may be impossible to dislike, but this bug certainly isn’t. 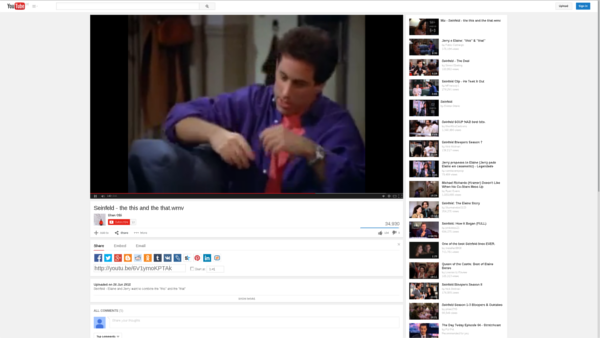 Seinfeld’s “The Deal” in Firefox

To put the problem another way, fullscreen video only works the first time it’s attempted, and thereafter fails to show any images at all.

After what feels like years of suffering from this bug, a newbie Fedora convert last week encouraged me to cure the itch. Here’s how to fix it, adapted from Mozilla’s guide for Ubuntu.

What we do here is basically change the command that Linux uses to run Firefox. Instead of running it directly (%u means use the same window if new links are opened, instead of creating new ones), we preload a graphics library first (libGL). That graphics library handles the fullscreen switching properly.